This great symbol of Hanoi, elegantly lit after the sun does down, may be the most photographed monument in the city. Indeed, throughout most of the year the calm waters of Hoan Kiem Lake ensure a near perfect reflection making for an excellent photograph that evokes the history and mystery of this city of over a thousand years.

It may be surprising to learn that the Turtle Tower, or Tháp Rùa in Vietnamese, isn’t actually that ancient. It was completed in 1886 during the French colonial period, which is why the tower also features European pointed gothic arches and was once topped by a miniature Statue of Liberty. Ironically, this statue was removed and destroyed when the Tran Trong Kim ‘liberated’ Hanoi from the French in 1945.

Although it’s original purpose remains contested, the Turtle Tower is now considered by many as a monument to honor the Turtle god that received the divine sword from King Le Loi after he defeated invaders from the north. 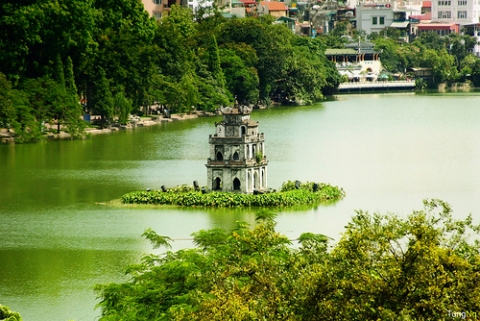 So after taking a stroll around the lake once or twice, make sure you also climb up to Cau Go for some pictures of Thap Rua from above, and a delicious Vietnamese meal!