Vietnamese cuisine is world-famous, but few visitors to the Southeast Asian country think about what they'll be sipping on the streets of Hanoi or Ho Chi Minh City. That's a mistake: the country's drinks are as delicious and diverse as its cuisine.

Most drinks in Vietnam, including beer, are usually served over ice. In the past, refrigeration wasn't common, so drinks were room temperature until poured over ice, and in the always hot-and-steamy south of Vietnam, a warm beer or soft drink doesn't really hit the spot.

Coconut water may have just shown up on your grocery store shelves a few years ago, but it's been a popular drink in Vietnam for centuries. You won't see the packaged stuff, though: here, it's drunk straight out of the coconut—and this coconut water is grassier, sweeter, and more full-flavored than anything you'll find in a package—trying it is like drinking raw milk for the first time. Generally, the smaller coconuts are sweeter than the larger ones.

Whole coconuts are unwieldy to store, so vendors will chop off the outer green husk and keep the small white inner shell, cut into a shape that won't fall over when put on a flat surface. These white globes are usually kept on ice until you order one, then a giant machete is used to chop a hole in the top.

Coconuts are usually harvested when they're about seven weeks old—any earlier and the juice is gassy, any later and it tastes too salty. To judge the readiness of a coconut, the harvester will chop one open to inspect the flesh, which should be jelly-ish but not completely translucent. Hard white coconut flesh is a sign that the fruit is too old for drinking.

Locals will advise you not to drink coconut water after 5 p.m. if you want to sleep well, because they believe it has diuretic properties if you drink too much of it; before 5 p.m., however, it's the go-to drink for rehydrating. 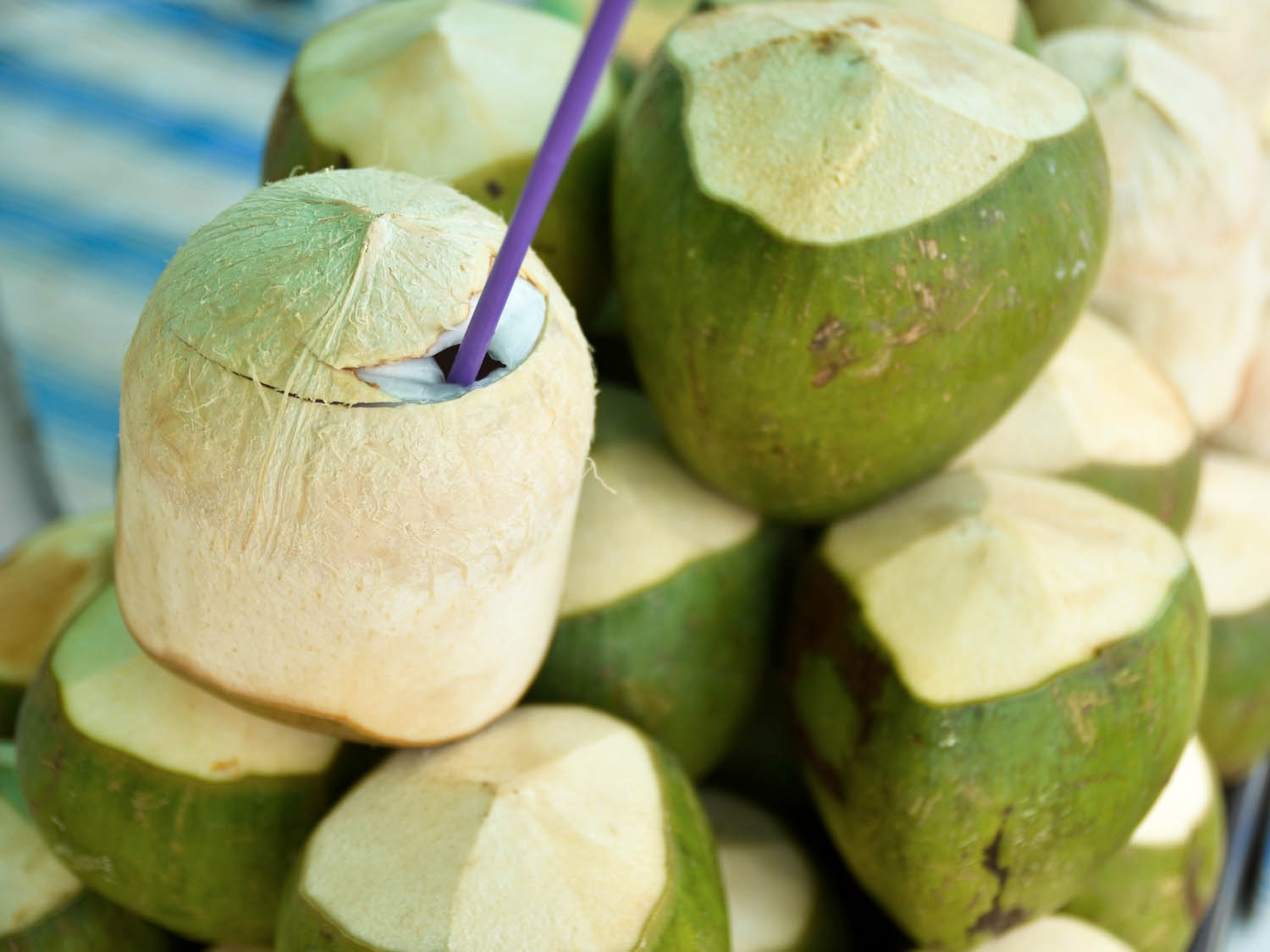 This sweet and nutty Vietnamese herbal tea is usually served over ice, making it perfect to sip in the chaos and noise of a Vietnamese wet market on a steamy day. Believed to have "cooling" properties according to Chinese medicine, the most basic nước sâm recipe contains sugar cane, nettle leaves, grass roots and corn silk—an illustration of the Vietnamese aversion to wasting anything. Variations of this drink can also include dried longan, the flower of the sawtooth herb (also known as spiky coriander/cilantro), and roasted water chestnuts. 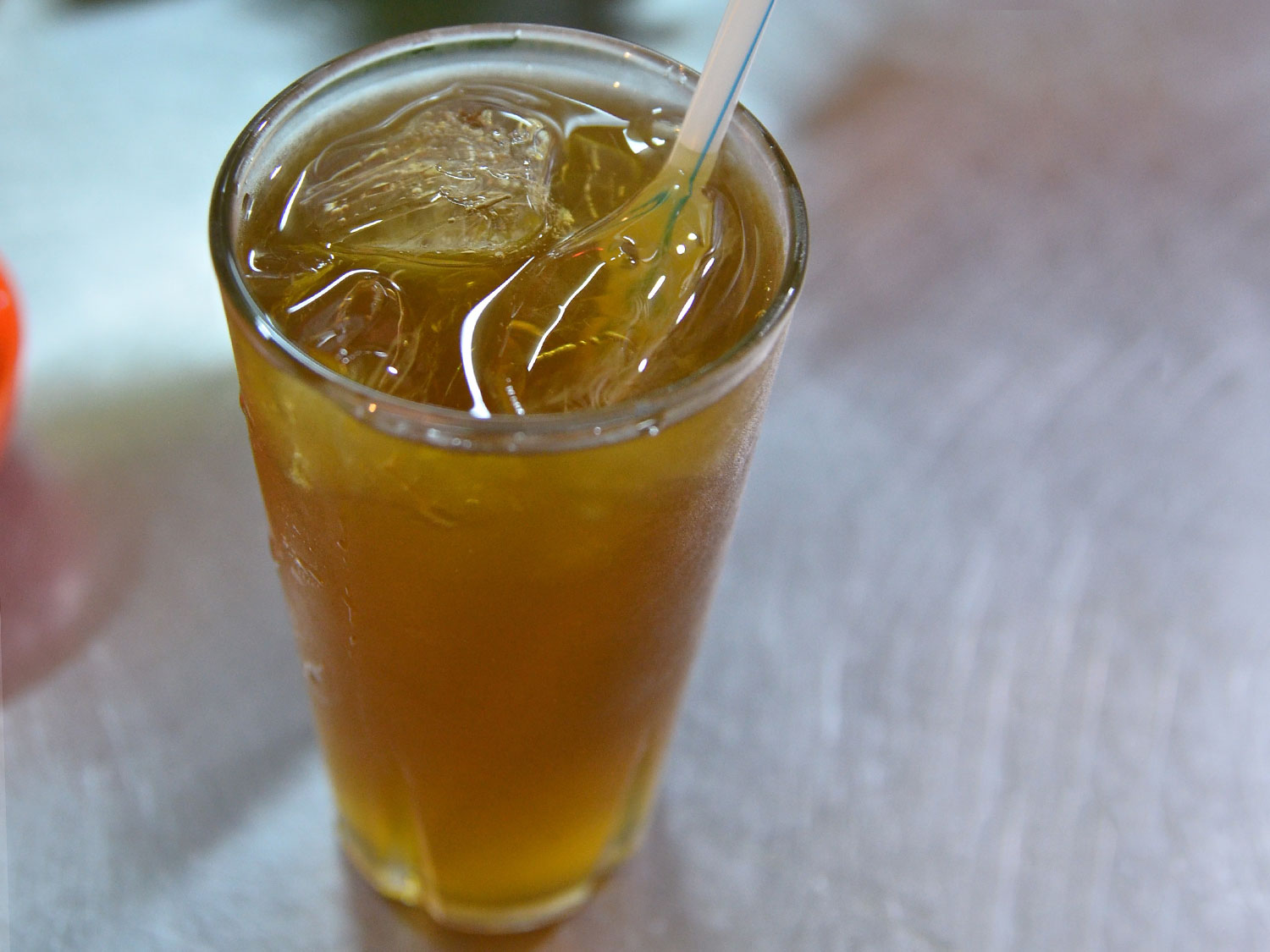 The go-to drink for hungover Vietnamese men, trà atisô is believed to have liver-cleansing and detoxifying properties. There are two versions of the tea, which is usually served with ice—the sweetened yellowish version made from the artichoke flower and the intensely bitter black version made from the artichoke stems. My advice is to avoid the black tea and go for the sweetened version, which has a delicate nutty flavor. Artichokes are grown in Dalat in Vietnam's cool Central Highlands but packets of artichoke tea are available in supermarkets throughout the country.

Beer is one of the exceptions to the rule that drinks aren't served with food in Vietnam. In Vietnamese, the phrase "di nhau" means "to go drinking." But the term refers to much more than just the drinks; there's a whole range of tapas-style dishes that accompany a Vietnamese drinking session, such as prawns barbecued with chili and salt, clams steamed with lemongrass, green mango with a prawn-chili-salt dip, or coconut snails sauteed with butter and fish sauce.

Many Vietnamese beers are only available in their home region, so your options will vary depending where you travel. In the southern hub of Ho Chi Minh City, formerly known as Saigon, the local beers are Saigon Red, Saigon Special and 333, all lightly hopped and slightly sweeter than beers from other parts of the country. In the central region of Vietnam, the local beers are Huda (the name combines the words Hue, Vietnam's former Imperial capital, and Denmark), and Bia La Rue, a slightly more bitter beer believed to have originated from a French recipe. A visit to Hanoi is not considered complete without a pilgrimage to Bia Hoi Corner (at the junction of Luong Ngoc Quyen, Ta Hien and Dinh Liet) to try bia hơi (fresh beer), a low-alcohol draft beer with a clean, crisp taste.

Of course, the locals don't always choose the local brew. Holland's Heineken, Singapore's Tiger Beer, and Japan's Sapporo are also popular, and there's an increasing number of microbreweries producing a range of craft beers. Brewpubs in Vietnam usually serve Eastern European fare, such as sausages and sauerkraut, which is eaten local-style: with chopsticks. 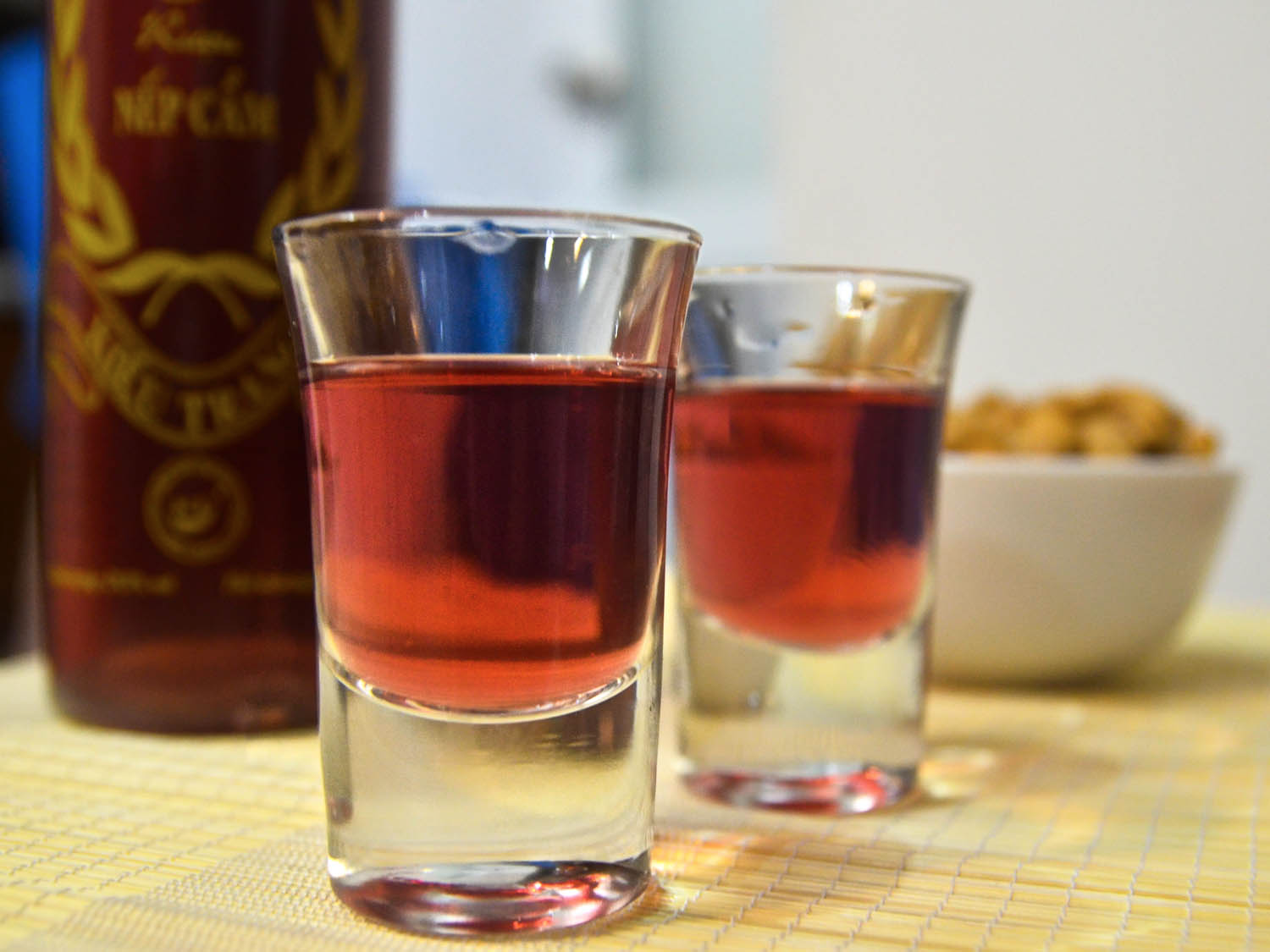 Drinking the hard stuff in Vietnam is for the most part considered a man's domain. Rice wine, which clocks in at around 29.5% alcohol, is the traditional masculine tipple and drinking it is a social activity (a very social activity). Groups of friends will gather to drink rice wine out of a communal shot glass or two.

A range of wonderful snacks such as spicy squid jerky and barbecued meat or seafood usually accompanies this type of drinking session. Sticky rice wine (rượu nếp cẩm) is smoother and sweeter than the regular rice wine, which can be quite fiery. Neither should be confused with rượu thuốc, "medicine wine," which is rice wine bottled with medicinal items which run the gamut from whole cobras, cuckoos, and seahorses to vegetarian options containing only herbs.